Skip to content
After the terrible weather earlier in the week, Marstrand is now truly turning on the charm for the competitors at the Dragon Gold Cup 2021 by Yanmar. Day five of the regatta, the second day of racing, produced perfect champagne sailing conditions that allowed races three and four of the six race series to be completed.

For Russia’s Anatoly Loginov it was a day of mixed emotions. Sailing with his long-standing team of Alexander Shalagin and Vadim Statsenko he showed the fleet a clean pair of heels in both races, but a black flag disqualification in the opening race of the no discard series means he now lies eighteenth in the overall standings with little chance of a podium finish.

Overnight leader Pieter Heerema of the Netherlands tightened his grip on the championship by adding fifth and third places to his scorecard giving him a comfortable, but by no means unassailable, eleven-point delta on his nearest rival. 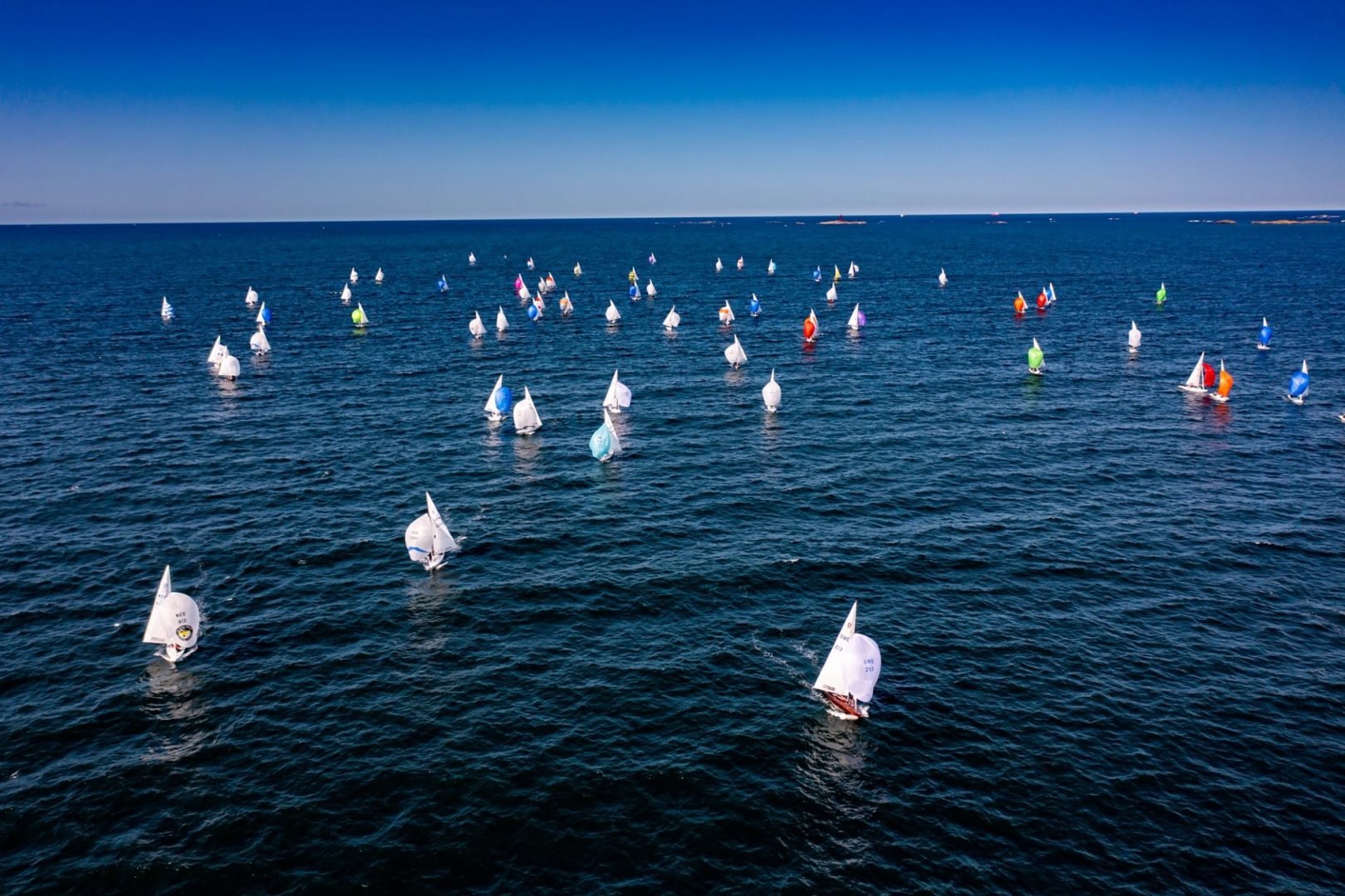 Behind Heerema just four points separate second to fifth places. Germany’s Dirk Pramann moves up from third to second on twenty-two points thanks to an eleventh and second and leapfrogs over reigning Gold Cup Champion Pedro Andrade from Portugal who scored an eighth and seventh to give him twenty-three points total. Russia’s Dmitry Samokin put in two good races finishing third and fourth to jump up the ranking into fourth on twenty-four points, while Britain’s Andy Beadsworth sailing for the Turkish Provezza Dragon team came seventh and ninth, dropping them from fourth to fifth on twenty-six points. 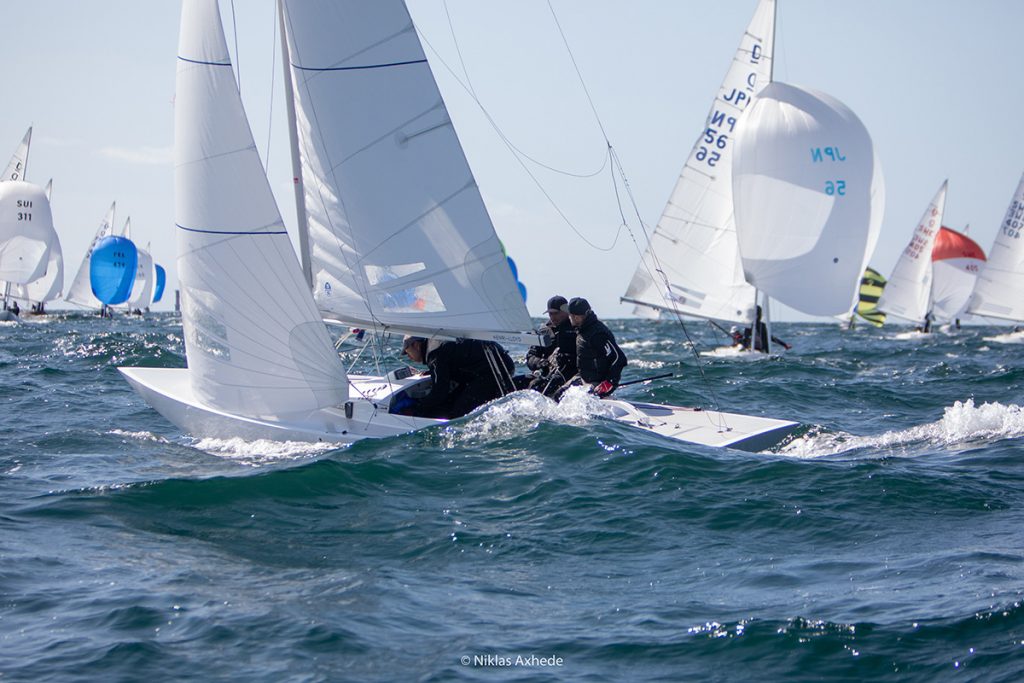 After sailing Pieter Heerema’s crew Lars Hendricksen commented, “We finished third in the fourth race after a tricky start, but we managed again to tack on the shifts to get out of the crowded areas. In the third race we were fifth so all in all a very good day for us. The weather has been fantastic, but we are all a little bit tired now and I think tomorrow we are going to have two races again!”

In the Corinthian Division Sweden’s Martin Pålsson has begun to establish a good lead on his rivals too, with a fifteen-point lead over Belgium’s Ben Van Cauwenbergh and Denmark’s Frank Berg, who both count twenty-four points. Germany’s Benjamin Morgen lies six points behind them in fourth, while Denmark’s Søren Mortensen, Sweden’s Björn Palmquist and Russia’s Viktor Fogelson are all tied on thirty-seven points with Mortensen taking fifth on countback. 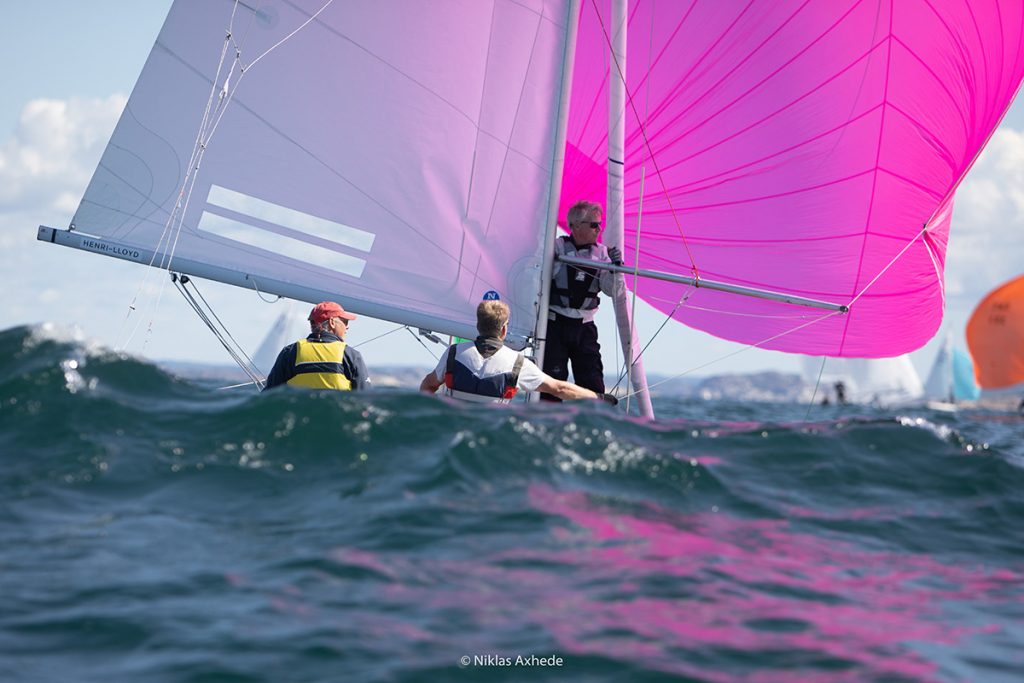 With just one more day of competition to come and everything to play for the Race Committee has published an amendment to the programme to allow two races to be sailed tomorrow starting at 10:00, which would complete the full six race programme. There is a final warning signal cut off time of 15:30, but with another day of good winds forecast this should be quite possible.

After sailing the competitors gathered for the now traditional Hawaiian Shirts Party hosted by Dragon sailing legend and International Dragon Association Championship Coordinator Martin Payne. During the evening Xavier Vanneste of the Belgian Dragon Class invited the teams to join them at the Royal North Sea Yacht Club in Ostend for the next Dragon Gold Cup in August 2022, and as is traditional a host of fun prizes were presented. 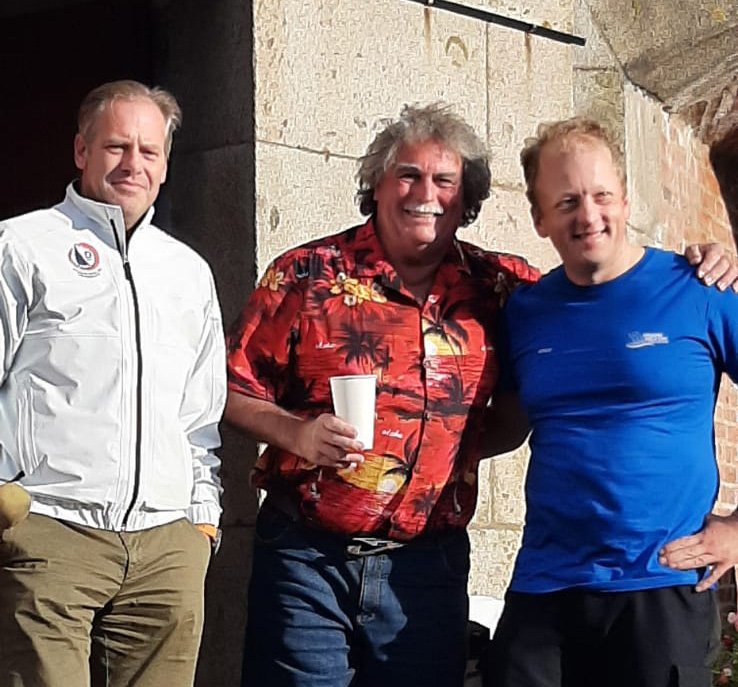 Bottles of Champaign Taittinger were given to the best dressed individuals and teams in Hawaiian shirts, with a special prize for Nicholas Rädecke of GER1180 Rosie, who not only wore a splendid shirt but also shaved his beard off for the evening leaving only his moustache, in honour of his host whose is famed for his bountiful whiskers. There were also bottles of Taittinger for the Australian team of Torvar Mirsky, who are brand new to the fleet but really impressing everyone with their performance as they lie sixth overall going into the final day of the regatta.

Dragon Class Race Committee Representative Nino Shumeli presented another bottle of Taittinger to DEN410’s crew of Jens Christensen, Anders Bagger and Kim Anderson who had managed to hit not one but three marks during the day, leaving the fleet wondering whether what they really wanted to be was pirouetting ballerinas rather than sailors. As the immediate past President of World Sailing Kim Anderson naturally came in for a great deal of good-humoured ribbing about his knowledge of the racing rules of sailing regarding contact with marks! 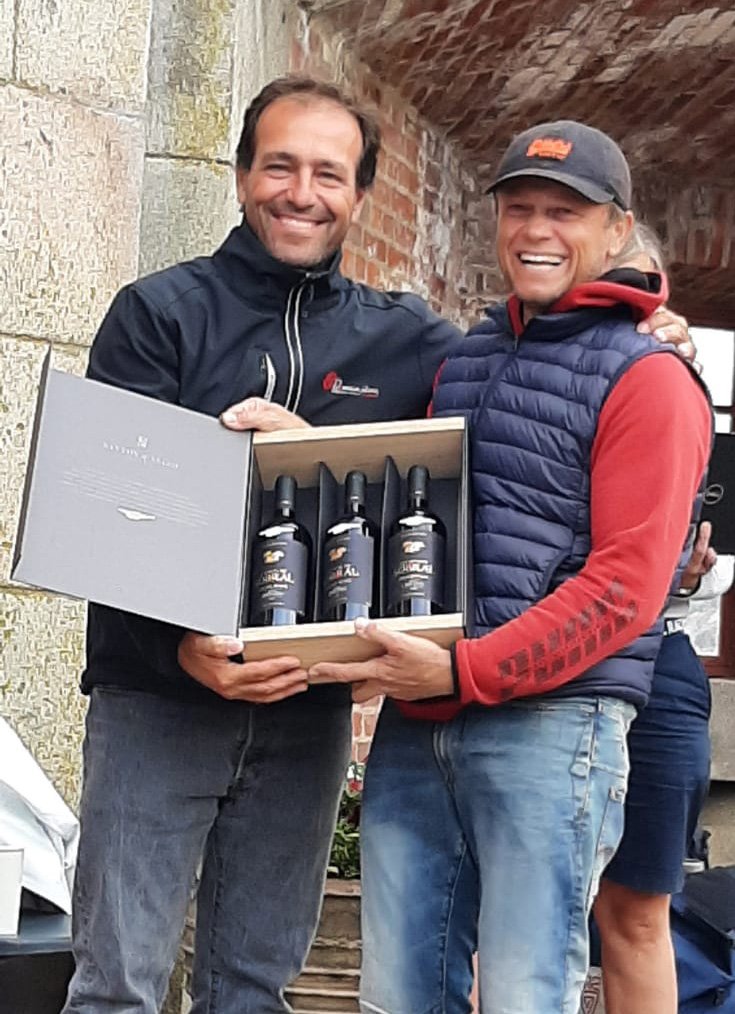 When not winning Gold Cups, Pedro Andrade is part of the management team of Petticrows, the most prolific of the Dragon boatbuilders, and on behalf of Petticrows Pedro presented the daily racing prizes which included cases of delicious Portuguese red wine, North Sails bags and even a brand-new spinnaker pole for the leading Corinthian team.

The organisation of this Gold Cup has taken meticulous planning by the Marstrand’s Segelsällskap, the Göteborgs Kungliga Segelsällskap and the Swedish Dragon Class. Dozens of volunteers have given up their time to make the event possible. Not only have they had to contend with the usual business of organising a major international regatta, but they’ve had to do it under COVID-19 restrictions. All social gatherings must comply with Swedish social distancing laws, special arrangements had to be made to enable competitors and officials from certain countries to enter Sweden which has tight border controls, and the organisers have even arranged for COVID-19 testing on site for those who require negative test certificates to return home.

All of this has added considerably to the cost of running the regatta and huge thanks must go to title sponsor Yanmar and all the supporting sponsors and official suppliers who have helped make it possible. Amongst the 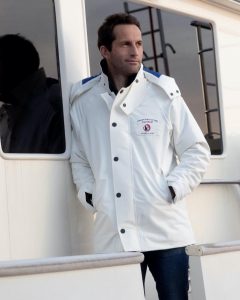 sponsorship partners are Henri-Lloyd, who have created a limited-edition range of Dragon Gold Cup 2021 clothing including the iconic Consort and Consort 2 jackets, available to purchase during the regatta.

Marstrand is the home port of Henri-Lloyd Chairman Hans Eckerström and when he heard the Gold Cup was coming to town not only did he step up with sponsorship, he also decided to get personally involved as he explains: ”I’m a rookie in the class, having bought a second-hand boat last summer as I saw that the interest here in Marstrand was picking up and I thought it would be a fun complement to the other boats that I sail. I am sailing both the J70 and Dragon in parallel, and while they are quite different, they are equally challenging in different ways and I’m quite surprised as to how physical the Dragon is. If you really want to push it, you need to be quite fit and work hard. Also, with no toe-straps you need to hike out in quite an exciting way.” 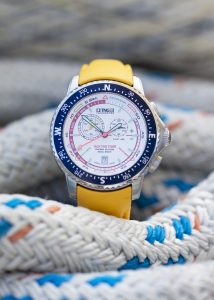 Another sponsor that has created something specially for this event is TNG Swiss Watches, the official time keeping partner of the Gold Cup. TNG Swiss Watches was founded in 1998 in the Netherlands, a country well known for its design, innovative technology, and water sports. Sailing is in TNG’s DNA and in the name, TNG is short for Tack & Gybe, and the company will donate two watches to the regatta. The Classic Tornado Sailing Chronograph will be first prize for the overall winner, while the Sailmaster will be awarded the winner of the Corinthian Trophy. Even if you are not in with a chance of winning one of these beautiful watches you can still purchase one, with a special discount offered to competitors during the event.

The regatta concludes on Friday 20 September with two races schedule for the final day with the first scheduled warning signal at 10:00 and no warning signal to be made after 15:30.

Further details about the event can be found at www.goldcup21.com. 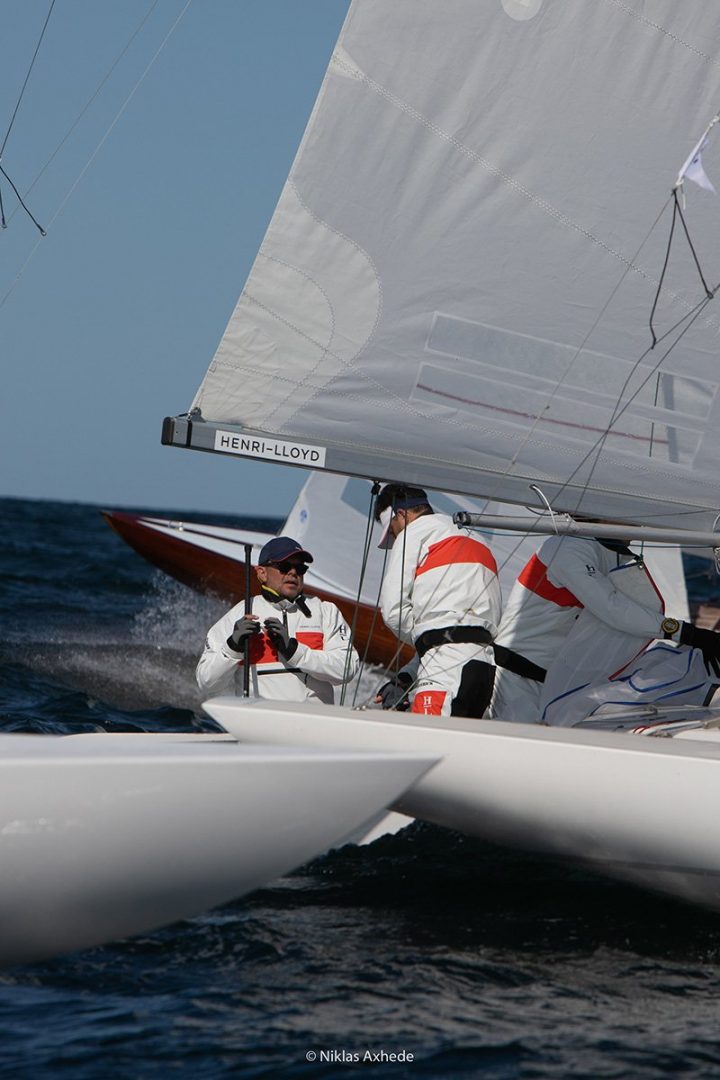 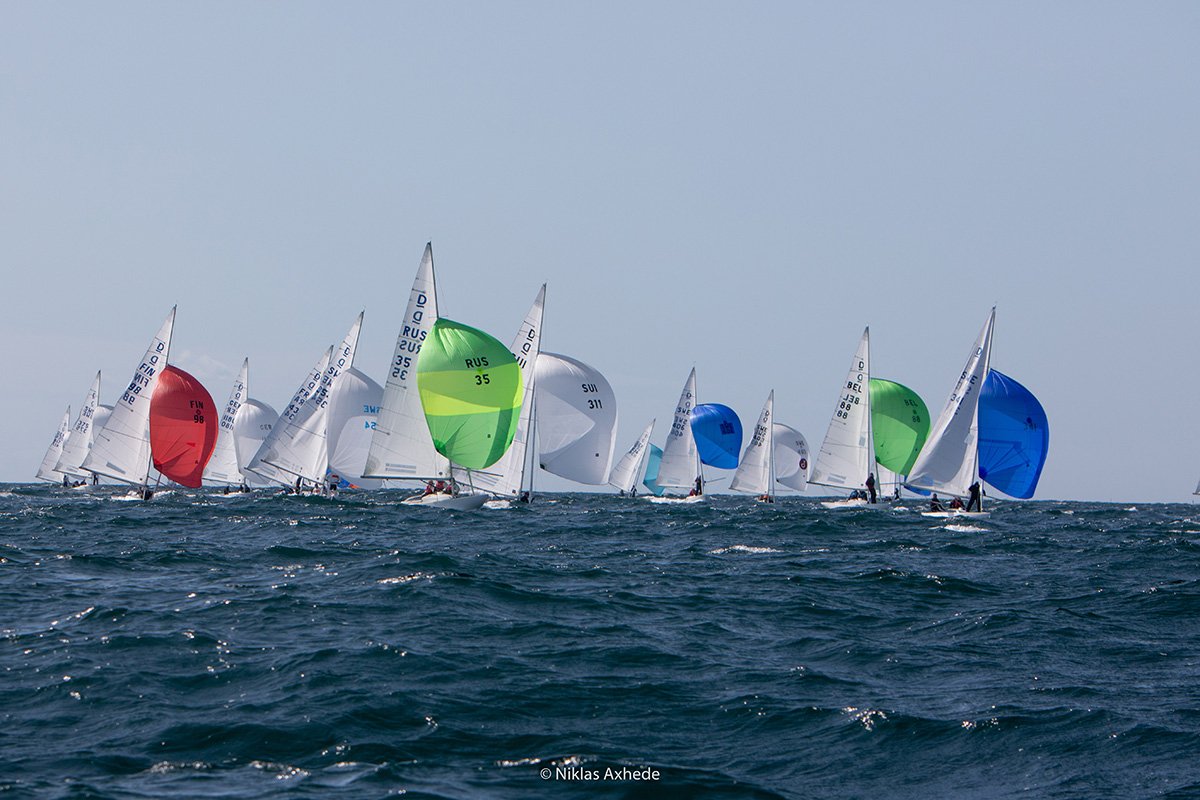 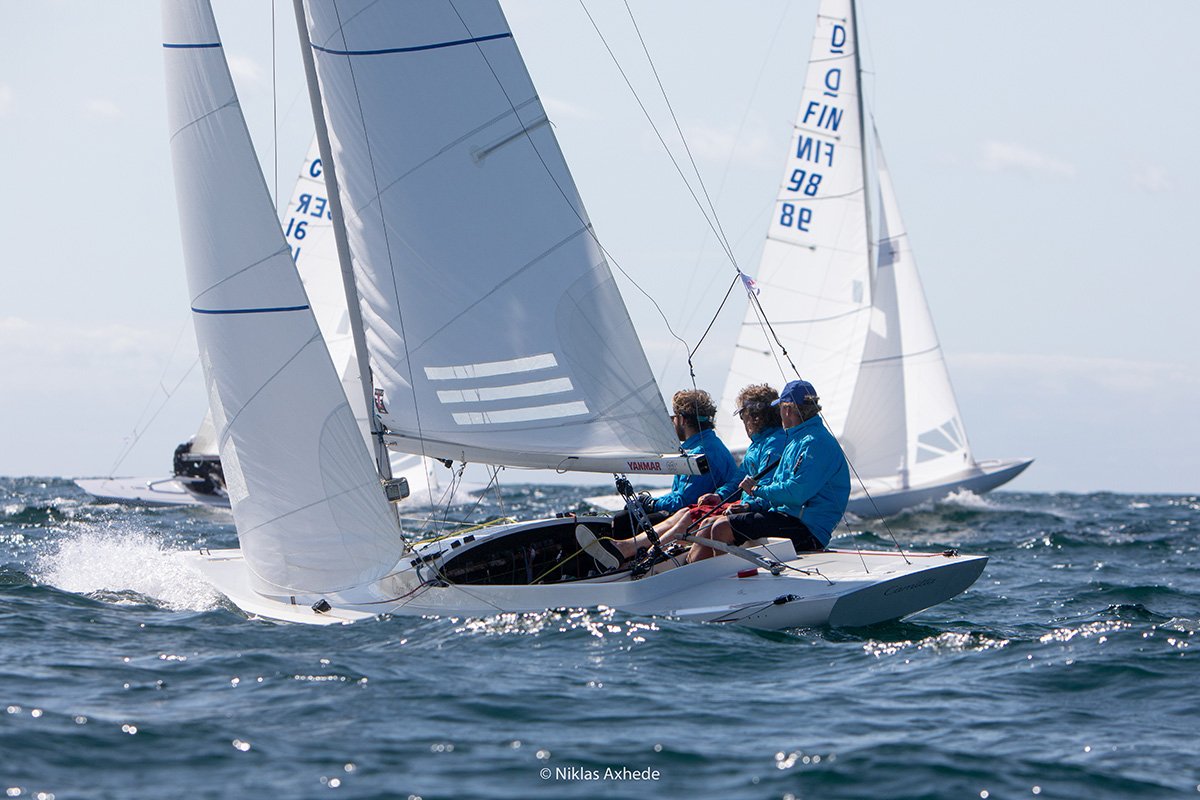